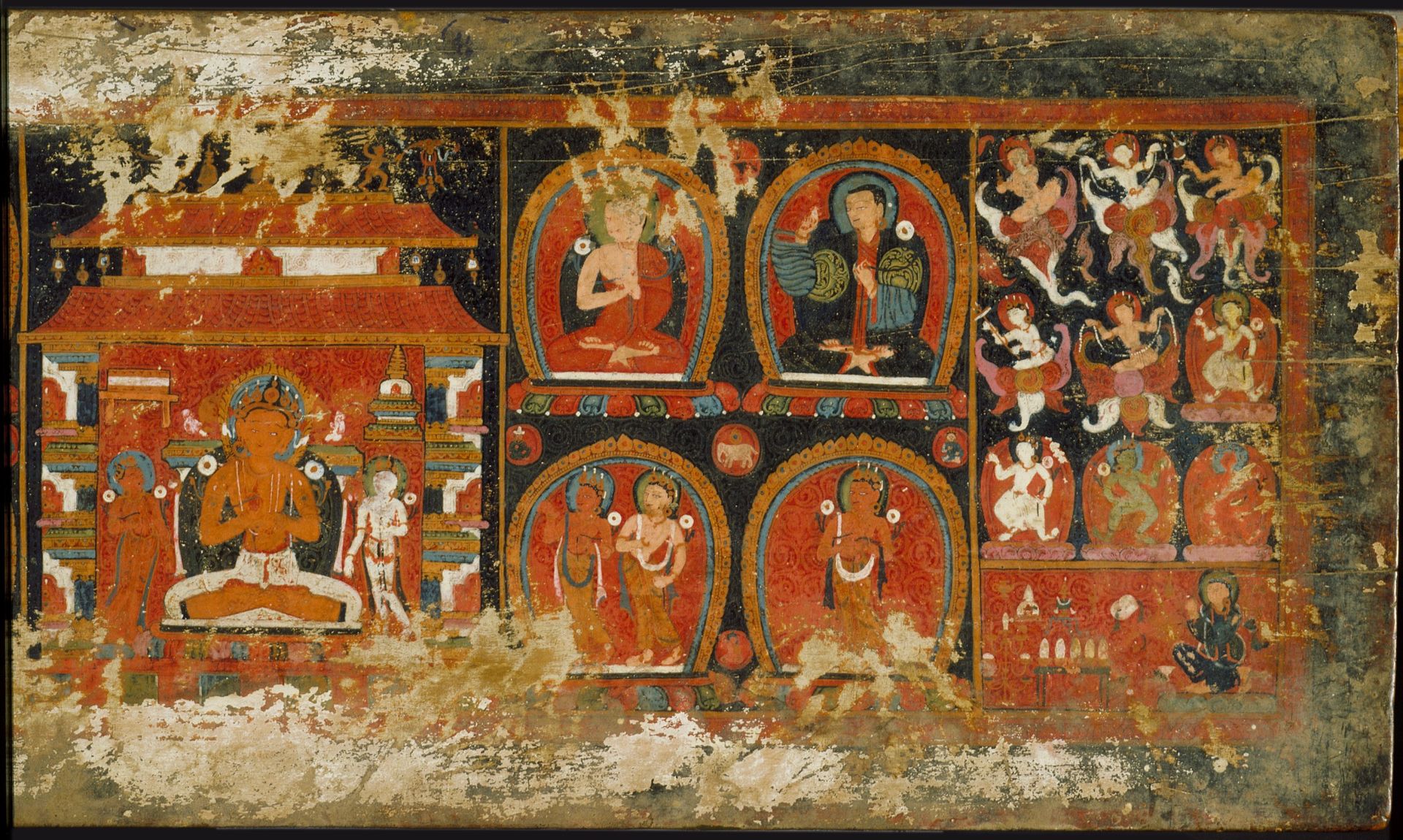 Call it earthy humour, call it having a primitive mentality, call it being in touch with the stuff of life: whatever you call it, there’s a lot of shit in Buddhism. An example of this is the eighth century Buddhist writer Shantideva, in his Guide to the Bodhisattva’s Way of Life. Shantideva was a fat saint, a saint who apparently loved his belly as much as he did his practice of Buddhism. I personally have always had a soft spot for obese saints. Thomas Aquinas was another, and was — like Shantideva — subjected to mockery by his companions. Umberto Eco tells a story about Aquinas, how at one mealtime his companions rushed to the window and shouted ‘Thomas! Thomas! Look! A flying ass!’ The enormous Thomas stood up and waddled to the window to see this great miracle. As he looked out of the window eagerly shouting, ‘Where? Where?’ the other monks fell about laughing. Thomas, however, was unruffled. He turned to them with the words, ‘I should rather believe in a flying ass than in a lying monk,’ and he left the refectory It is the kind of story that could equally well have been told of Shantideva.

To say that Shantideva was overweight is to say that, on balance, he ate more than he shat, in this fashion becoming somewhat portly. He ate five bowls of rice a day. This may not seem a lot to one who has never seen a monk’s rice bowl. But these bowls are not small. One bowl of rice a day is sufficient to keep a monk healthy and to keep hunger from the door. But Shantideva ate five.

The other monks despised Shantideva’s gluttony and his laziness, as he lounged around all day, scratching himself, doing nothing useful, showing scant interest in more serious Buddhist matters. They concluded that he was a disgrace to the monastery, and they wanted rid of him; but it is hard to expel somebody from a monastery when they have not done anything wrong, but have just failed to do anything at all other than attend to their daily bodily functioning. And so they set out to trick him by asking him to recite the Pratimoksha, the monastic code which all monks were expected to know by heart, in front of a gathered assembly. When he failed, they reasoned, the humiliation would drive him from the monastery and they would be rid of him.

So Shantideva came before the monks, and he asked them what they would like to hear. Would they prefer something old or something new? They could have a recitation of the Pratimoksha, which they all knew by heart, after all, but they could also have a sermon that was an expression of Shantideva’s own understanding. Insofar as he did understand them, he added with modesty.

This was too good an opportunity to pass up on. ‘Something new,’ the monks cheered, collapsing on the floor in helpless laughter. So Shantideva began to recite, his voice clear and distinct. The legend tells us that he recited the whole of the Guide to the Bodhisattva’s Way of Life, and the monks were reduced to a trembling silence. Shantideva left the monastery that day for a more peaceful life elsewhere. The stories say that he simply rose up into the air and disappeared. Whatever the case, he never returned.

Of course, all of this may be pure invention; but it does not really matter that much. Buddhism thrives on stories, and this is a particularly good one.

Eating, sleeping and shitting: the unholy trinity to which we are bound. We cannot go long without attending to each one of these. Call it the endless round of our existence. Call it samsara. Call it necessity. We are bodily creatures. We wake in the morning and wash the sweat and the sleep from our bodies in the shower. We put breakfast in our mouths, chew and swallow. The stomach churns, the digestive juices set to work —acids and enzymes— breaking down, always breaking down, the fruit that hung upon the tree, the bread that was once grain, the butter churned from the milk of cows. A little later we expel from our bodies what we do not need, and we wipe ourselves clean. We set to work, our mind wrestling to come to grips with the new day, with the surge of sensations and feelings and hopes and fears and encounters. We walk here and there, pick up a pen to write or to fill in a form, lift bricks on our shoulders. We suffer weariness and fatigue. Our bodies become heavy with tiredness. Every task requires such extraordinary co-ordination of so many of our faculties, the ordered coming-together of so many pars of our being, that it is a miracle we can do it at all. But there is a cost. We tire easily. We cannot keep it up for long. Eventually we must sleep so that we may recover from these exertions and labours, we sleep, lost in incoherent dreams. We wake the following morning and the whole cycle starts again. It continues, day after day, for the whole of our lives, until we are exist no longer.

I like to think that Shantideva knew about all this, that he at least was not out of touch with his own guts, his own entrails, with the reality of this endless round. His bowels rumbled and gave way. His mouth opened and he filled it. He lay on his bed and slept, no doubt snoring loudly. When he ascended or descended the stairs he puffed and panted. If you read the Bodhicaryavatara, this consciousness of our bodily being runs throughout the entire book. The body that can be wearied and wounded, that can find itself naked to the touch of steel or fire, that enjoys fleeting pleasure in its contact with another, that bleeds and weeps and leaks and breaks down, this fragile house of bones covered with flesh and with skin: how much wisdom may be already possible for one who, turning his back on abstractions, truly reflects on this body: activity and rest, arising and sleeping, eating and shitting, coming to pass and passing away?