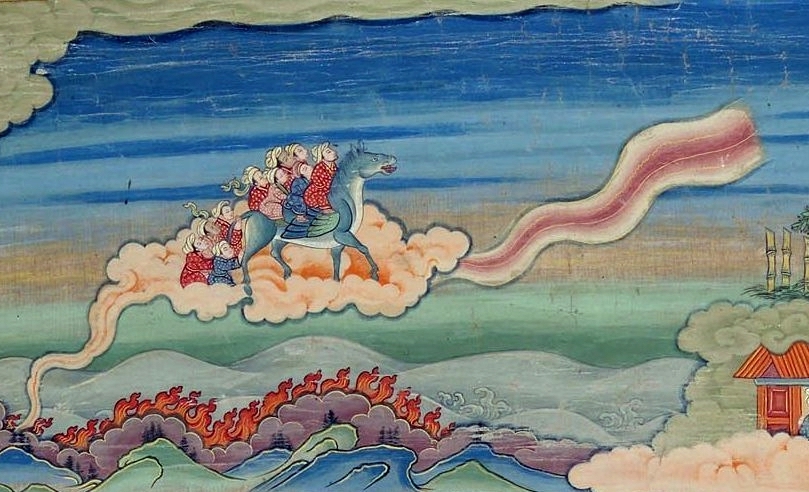 Music in the Sky

Review: Music in the Sky: The Life, Art and Teachings of the 17th Karmapa, Ogyen Trinley Dorje

In 1999 a 14-year-old boy fled Tibet for India. The 17th Karmapa, spiritual leader of the Kagyu school of Tibetan Buddhism, had chosen to leave his country clandestinely and to take up a life of exile. Now barely out of his teens, he lives and teaches in the Indian Himalayas. Michele Martin’s Music in the Sky is the first major book dedicated to the Karmapa’s life, teachings and art. The book is divided into three parts. The first part gives the Karmapa’s biography, whilst the second is a collection of his teachings, poetry and drawings. The book concludes with a history of the entire lineage, to set what has gone before in context.

There is much in this book that will satisfy the devotee. It is the second section, where the reader is introduced to the Karmapa through his own words, that is most impressive. One cannot but be astonished by the assurance of the writing for one who is still in his teens. The material is clear, heartfelt and steeped in considerable learning, giving the sense that, when the 17th Karmapa finds his own voice amid the clamour of the tradition, it will be clearly a voice to be reckoned with.

Ultimately, however, this book disappoints. In her biography, Martin takes leave of her critical faculties in favour of outright hagiography. Her account of the Karmapa’s life abounds in what she calls ‘unusual phenomena’: auspicious signs, miracles and wonders. Employing accounts of such phenomena as justifications for one’s beliefs seems to me to be more suspicious than auspicious; and such an approach cannot but obscure more than it illuminates. A more sober, critical and well-researched book would have ultimately done greater service to it’s subject.