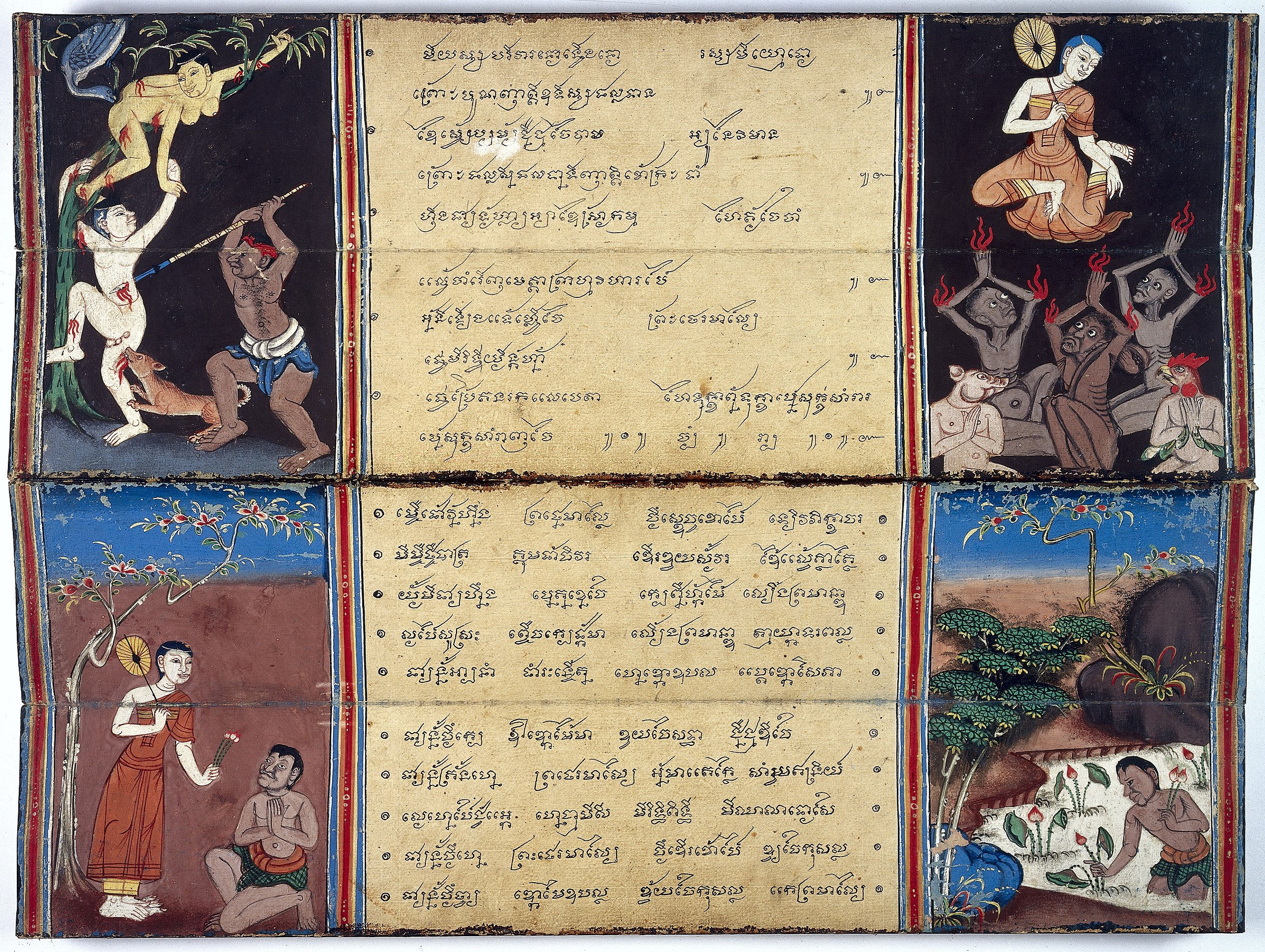 The Asokavadana tells the legend of Ashoka, the early Indian king who was responsible for the propagation of Buddhism throughout India. In the text there is the following story.

Ashoka, at the beginning of his reign and before his conversion, was an evil king; but his evil was outstripped by that of his jailer, who went by the name Candagirika. The jailer had a jail built that was, ‘lovely from the outside as far as the gate, but inside was actually a very frightful place…’ (p. 212)

This jailer was a man of little imagination, as those who spend their lives presiding over the incarcerations of others perhaps often are, and he was not at all sure what torments and miseries to put inside his prison. Fortunately, a monk unwittingly assisted him. One day, Candagirika was out walking when he heard a monk reciting a text called the Balapandita Sutra. This text is one in which the torments of the hell realms of Buddhism are lovingly described: pincers, tongs, red-hot irons, boiling copper, axes, iron stakes… And there were enough ideas here to act as a worthy inspiration to the jailer Candagirika:

“Such are the five great agonies,” Candagirika reflected, and he began to inflict these same tortures on people in his prison. (p. 213)

John Strong, the text’s translator, comments on the ambiguity, if not the unease, that the Asokavadana seems to betray in relation to these canonical descriptions of hellish worlds: however pure the intention of the monk who was reciting the sutra, its consequences were clearly undesirable, the images and ideas it expressed leading to terrible human consequences.

Hell, it is probably safe to say, is a more or less Buddhist invention. The hell of the Jews, sheol was not a place of torment so much as a place of shadow; and whilst there were torments reserved for those who had risen up against the gods in the Greek Tartarus, Hades itself – although grim, gloomy and far from pleasant – was not itself a place of the kind of acute torments that we now associate with hell.

It is true that Hell in the Christian West was a pretty unpleasant place; but it was not until Dante wrote his Divine Comedy that the sufferings and miseries of this hell became so minutely described and so highly variegated. There is some evidence that Dante was influenced by Buddhist descriptions of hell in writing his Divine Comedy: Bhikkhu Silabhadra has traced links between Dante’s work and the Nimi Jataka, a popular but non-canonical Buddhist work.

There are differences between the hell of Buddhism and that of the various brands of Christianity, of course; for example, Buddhist hells have nothing of eternity about them: they are temporary states. But, what interests me in the Asokavadana is this: the connection drawn between the literary hell of the Balapandita Sutra and the hell-on-earth of Candagirika. Within the frame of its own story, the hell described in the Buddhist text becomes the prompt and the inspiration for building a genuine hell-on-earth within Candragirika’s prison. The text raises the possibility that there might be something unwholesome in the Buddhist obsession with hell and with hellish states of being.

Of course, we could claim that this is just a story, that nobody has really drawn inspiration from the hellish descriptions in Buddhist texts; but I am not so sure. I remember attending a lecture by an anthropologist who had carried out fieldwork in Sri Lanka and who himself drew a similar connection, this time between the dioramas of hell that grace some Sri Lankan temples, and the hellish violence and torture that has at times flared up in that country and in which certain elements of the Buddhist monkhood are not always free from all implication. Similarly, Tessa Bartholomeusz has traced the connections between certain Buddhist stories, for example, and justifications for war (which is, after all, a kind of violence) in Sri Lanka. The question that must be asked is this: are literary or artistic depictions of hellish sufferings as appear in the Buddhist texts undermining of ethics? This is an important question partly because so many Buddhist texts are far bloodier and more hellish than many Buddhists would like to admit. From Japan to Tibet to Sri Lanka, the miseries of the hell realms are common themes in literature and art.

One argument that is advanced by means of an apology for these depictions is that they depict the very real sufferings of the world and that only through recognising the reality of suffering in the world is it possible to respond to it. Perhaps the monk who was reciting the sutra in the story from the Asokavadana was moved to compassion by the text, rather than to violence. Perhaps. But there are other, arguably better, ways of being moved to compassion: acting out of generosity, or responding to a genuine need, are more likely to foster compassion than sitting alone in one’s room reading about the miseries of hell. And there are also correspondingly fewer risks.

Another argument is that such texts are symbolic of the sufferings of the world. They are not really about iron stakes being driven into people’s bodies, or molten copper being poured into people’s throats, but about the miseries that come from craving and attachment and such-like. But explaining such things as symbolic undermines the fact that what the text is talking about are bodies that are being violated, torn and tortured. It is turning suffering into allegory; and down this route hard-heartedness lies.

Either way, I remain unconvinced. The Asokavadana is a powerful reminder – one of the few that I know of in the Buddhist tradition – of the dangers of such literary descriptions and of the way in which unwholesome acts can spring from such imaginings. This applies not only to depictions of the hell realms in the various traditions of Buddhism, but also to many of the imaginings of the various Tantric traditions in Buddhism.

It is far too easy to engage in apologetics, to interpret away all that is disturbing in such texts. But it would be better to face squarely and without flinching the questions raised by such disturbing imagery within the traditions of Buddhism, and to ask whether imagery of this kind truly helps in the cultivation of kindness and understanding. Do such unwholesome imaginings merely fuel the human lusts for cruelty and violence? Do they truly express the spirit of the Karaniya Metta Sutta – surely one of the most beautiful evocations of love in all of Buddhism?

Whatever living creatures there be, Without exception, weak or strong, Long, huge or middle-sized, Or short, minute or bulky,

Whether visible or invisible, And those living far or near, The born and those seeking birth, May all beings be happy!